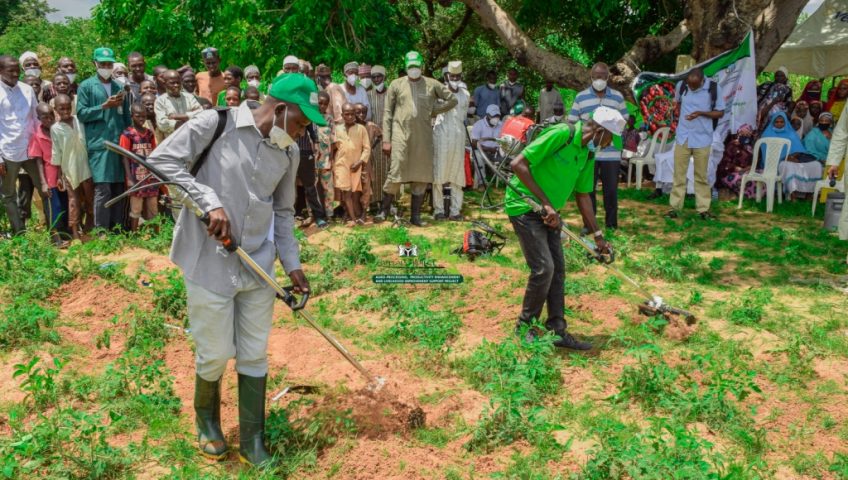 This intervention is in line with the Project’s subcomponent on Support to Technology Adoption aimed at increasing beneficiaries’ access to and adoption of improved agricultural inputs such as improved seeds & seedlings, agro-chemicals, agricultural equipment and farm machinery.

The recent demonstrations in Kano State held in three Local Government Areas spread across the three senatorial districts, had the NCO team, Staff of the State Coordination Office, Representatives of the State Government, Traditional Heads, Technology Demonstrators, Farmer Beneficiaries and other stakeholders in attendance.

Comparisons between the traditional methods used by the farmers and the improved technologies demonstrated showed greater efficiency recorded from the use of the modern equipment. Some of the observed merits during the demonstrations include time and energy efficiency; increased food safety and nutrition due to non-chemical weed control; reduction of drudgery and the promotion of precision farming that can lead to tremendous increase in production etc.

Beneficiaries who participated in these exercises were delighted by the positive outcomes of the demonstrations and expressed their willingness to adopt the technologies, while pledging to abide by the prescribed Good Agricultural Practices to increase their yields and improve their livelihoods. Many of these farmers are already adopting some of the technologies.

The technology demonstrations initiative being led by the APPEALS National Coordinating Office are tailored to each of the priority value chains and scheduled to hold in all the six participating states of the project.